Autumn is in full swing and it’s starting to become cold and wet in Cape Town. While I’m so grateful for the rain I am having serious nostalgia for the warm balmy Durban nights. So let’s kick off straight away with the second half of my Durban travels post.

Some of the surprise highlights of our trip were the many markets available. People always say that Cape Town is spoiled for choice when it comes to markets, but I think Durban is catching up very fast. We were able to experience three of them.

The first one was the Stables Lifestyle Market at Stamford Hill in Durban, comprised of about 100 stables that have been converted into various stalls containing arts & crafts, antiques, fashion, make-up, paintings, embroidery, cellphone accessories, books, toys, food and more. It has somewhat of a flea market feel to it. You wouldn’t go here for the latest in design trends but you might pick up some interesting knick-knacks pretty cheap.

There is an eating area with benches and tables at the back where a stage is erected for performances. We decided to try some Indian food from a halaal vendor called Crown of India. My butter beans curry and puri was exactly what I was hoping for from an authentic Durban curry, which was brought to our table by the friendly owner of the store. While eating I struggled not to laugh out loud listening to a very respectable looking middle-aged Indian guy singing Bob Marley songs. He was obviously a pro and knew what he was doing; it was just a bit of a strange spectacle. And then he broke into Kurt Darren’s ‘Loslappie’ and I nearly fell off my chair laughing. Thankfully the music was loud enough to drown me out. He did a really great job of it but it was truly the last thing I expected. This market open on Sundays from 10am till 5pm. It is also known as the Moonlight Market as it is open on Wednesday and Friday nights as well. 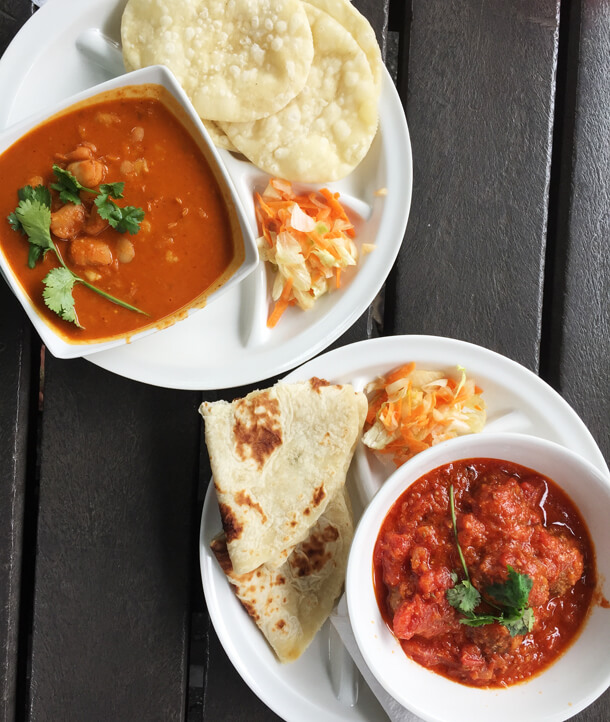 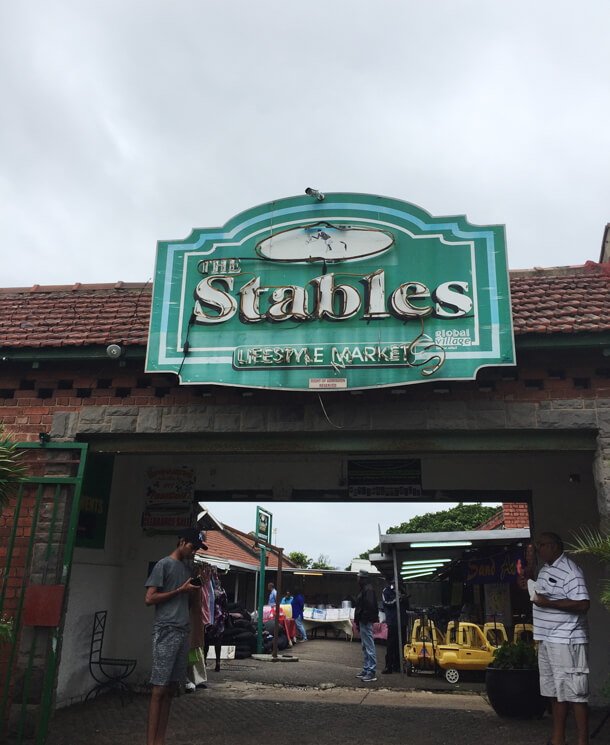 Victoria Street Market, also known as the Indian Market is like stepping into another world. It’s in a dodgy part of town and we were a bit two minded before deciding to park on the busy downtown street and head over. The entrance we used was flanked by several vendors outside, some selling crafts and veggies and others a strange selection of bones, what looked like sheep intestines, animal skins and Mopani worms ?. Once inside, there were very few Indian shops and a great many selling African curious both local and from our neighboring African countries. This market it seems once famous for Indian spices, clothes and product has seen a big change in it’s offering but is still a place popular with tourists. 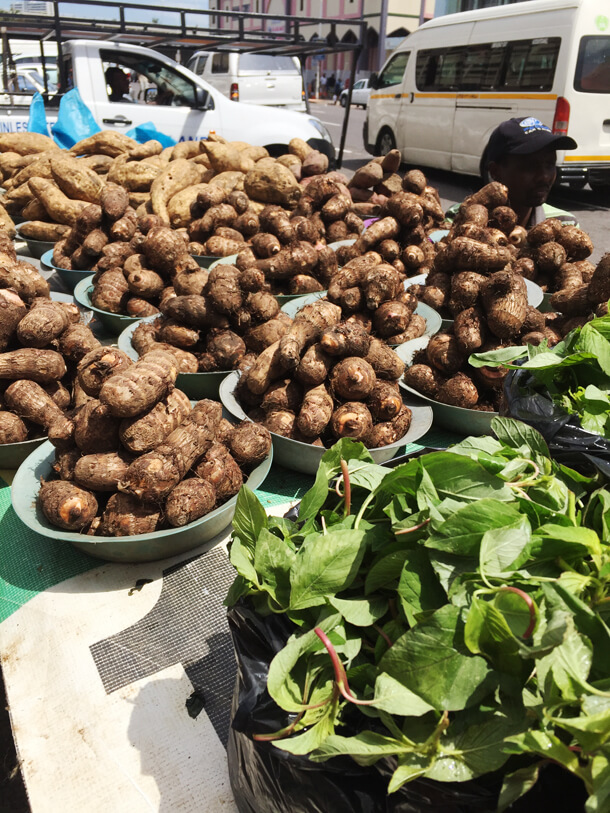 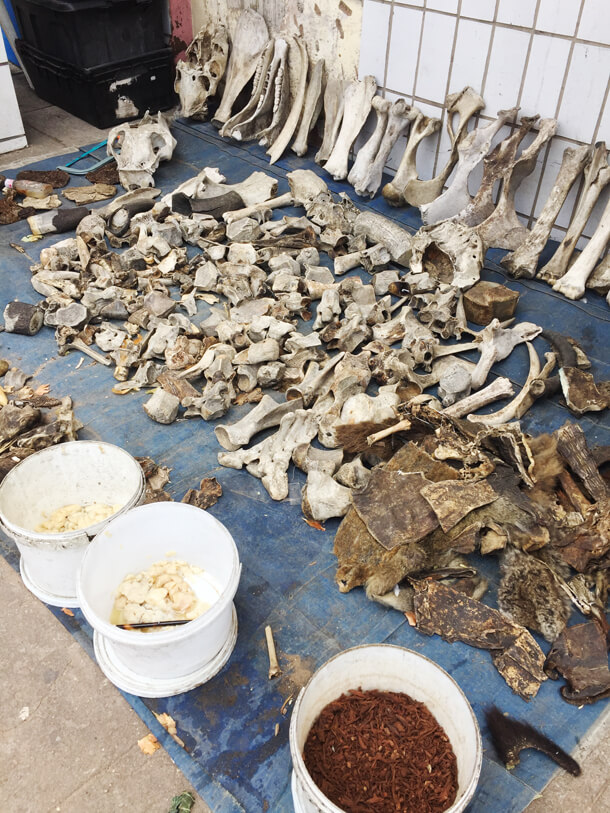 The third market we visited the same day we were leaving to come back to Cape Town. Luckily it’s a Saturday market called the I Heart Market. It’s a more trendy market selling artisan type products from baby clothes and jewelry to art and food. I noticed two fully halaal vendors at this market, one selling Middle Eastern food and the other artisan waffles. You can expect to pay a little more for the wares in general. It’s located right on the grounds of the Moses Mabhida Stadium.

This Stadium is one of those built during the Fifa World Cup in 2010. It is as impressive as the Cape Town Stadium of which we Capetonians are so proud. An added feature is a SkyCar, which runs on a track to the top of the arch over the stadium where you’ll be rewarded with spectacular and uninterrupted views of Durban and beyond. Tip: don’t park in front of the gates when the car guard tells you it’s ok! Lesson learnt. Durban traffic cops don’t play around. 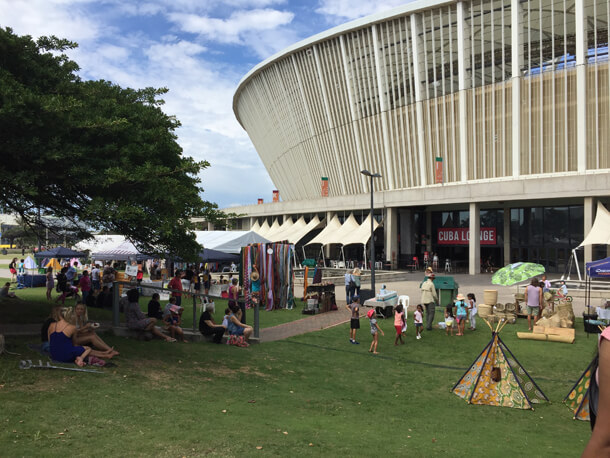 Our further food journey in Durban included a visit to the leafy suburb of Windermere where we visited the picturesque Antique Café, which is fully halaal. On the inside it is a period style maze of dining rooms and display rooms selling antique furniture, clothes and other items. The back leads to a garden with an eclectic mix of rustic tables and chairs under a canopy of trees. It is really pretty and serene. You may just have to watch out for the birds pooping from the trees above. We had a laid back light lunch here and you can read more about it in a full review coming soon. 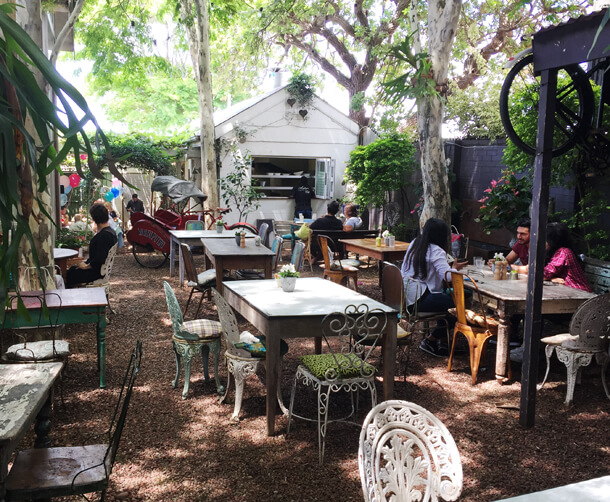 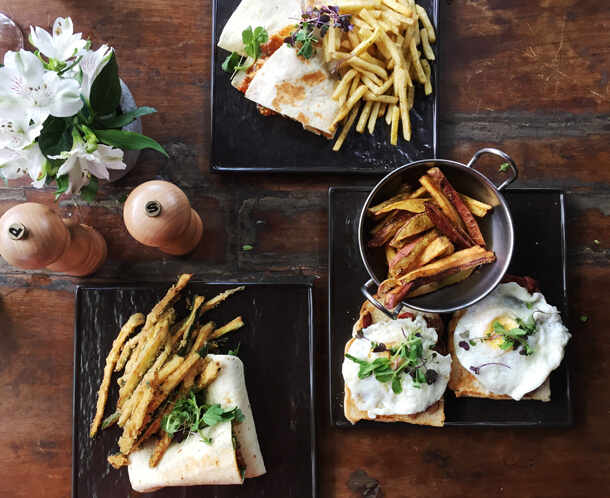 The Canvas Grill was a restaurant recommended by many of my readers before I left. We tried them for dinner one evening and despite the location with a petrol station right in front, it turned out to be as close to fine dining as were going to get that was fully halaal. The food was original and the theme of the restaurant was well considered and pulled through in the details. I convinced my better half in spite of rolling eyes to write this one and you can read Zulfikar’s full review here. 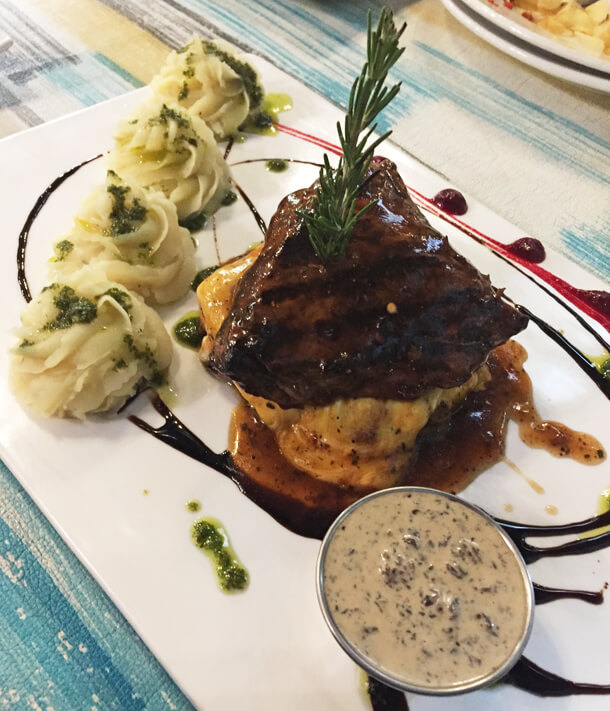 The Japanese Gardens in Riverside sounded like a must do tourist attraction. It turns out it’s not actually a formal garden; more of a picnic area or park with a Japanese flavor. It was worth the visit for the serenity of the water features and Japanese structures. But it was a bit too quiet and I can’t say I felt entirely safe. Perhaps on weekends it’s fuller with more families visiting. 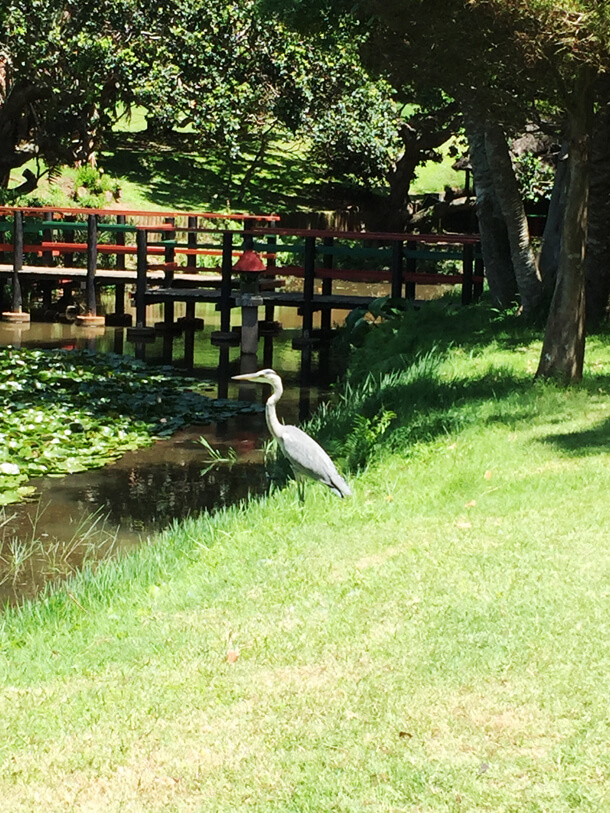 Nearby is the Hazrat Soofie Saheb Masjid which Zulfi visited for Jumuah. They have a ladies section as well and after Jumuah they serve lunch to the entire congregation. This mosque history goes back to 1895 when Hazrat Soofie Saheb arrived in Durban and bought a piece of land on the northern banks of the Umgeni River in Riverside. He built a humble wood and iron house which is now this impressive complex that comprises Mazaar, Mosque and Cemetry. It was even bigger but in 1968 the Darbar section was destroyed by bulldozers as a result of the Group Areas Act in order to make way for the White population group. 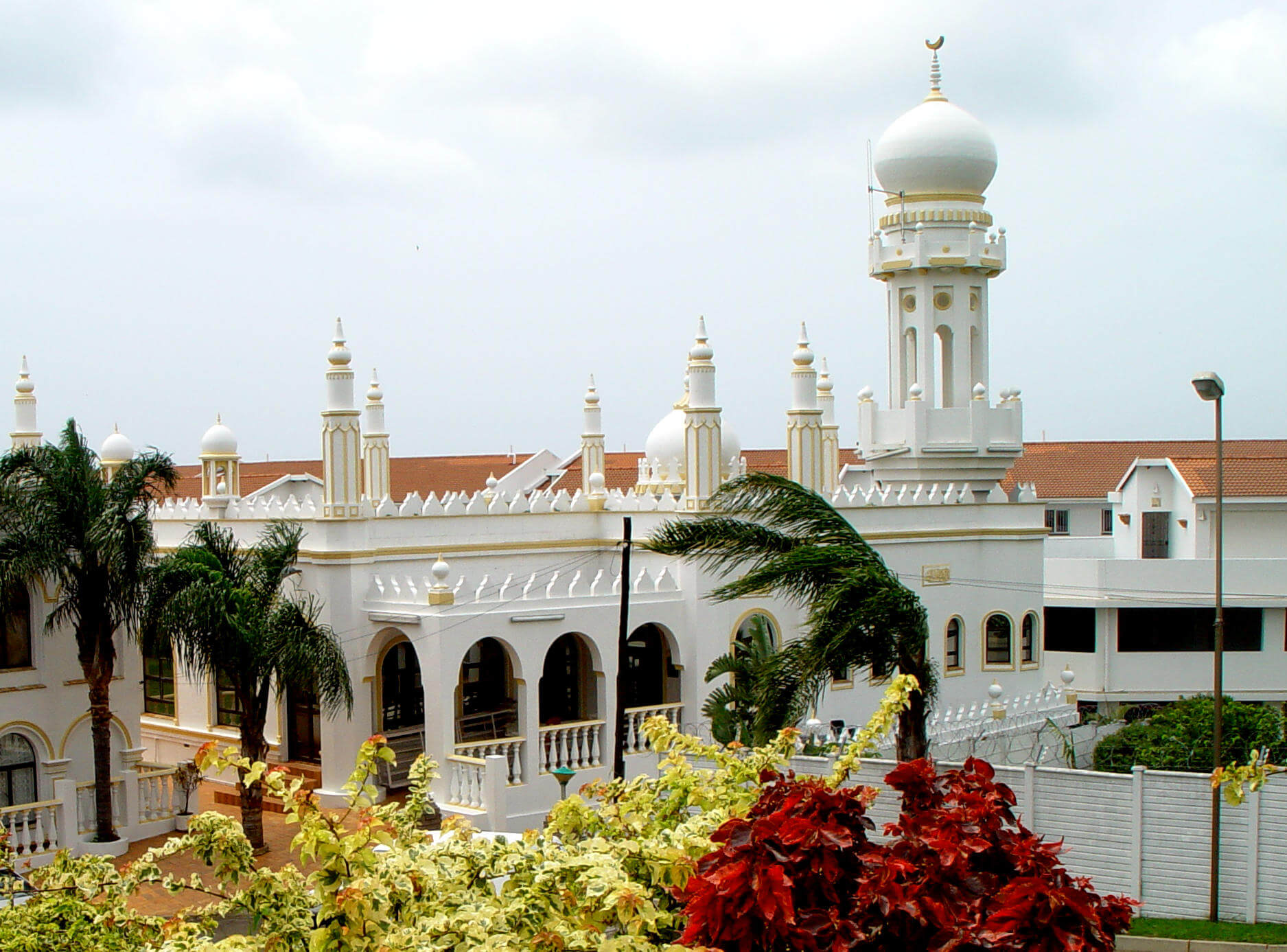 You’d expect that we would have had more Indian food during our time in Durbs but it was more of a variety. One of the few Indian restaurants we tried was My Diners at Gateway. They have a range of cuisines from Pakistani, Indian, Chinese, Western, Seafood and Vegetarian. The menu was vast and made choosing a challenge. We chose a prawn karahi and a vegetarian option of dhall makhani. They also cater for the kiddos with things like chicken strips and chips and pizza etc. Our food portions were both delicious and huge. One serving is enough for two people. Too full for dessert but unable to resist some rich and milky rasmallai I decided to take some home. Shamelessly enjoying it in bed late that night I can honestly say it’s some of the best rasmallai I’ve had. 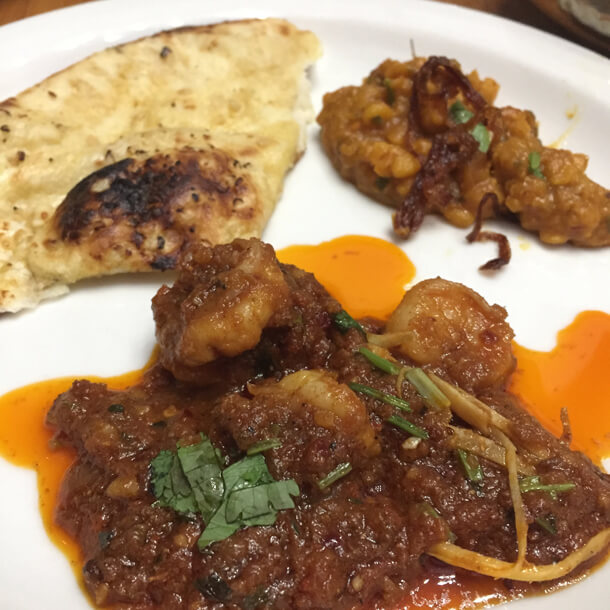 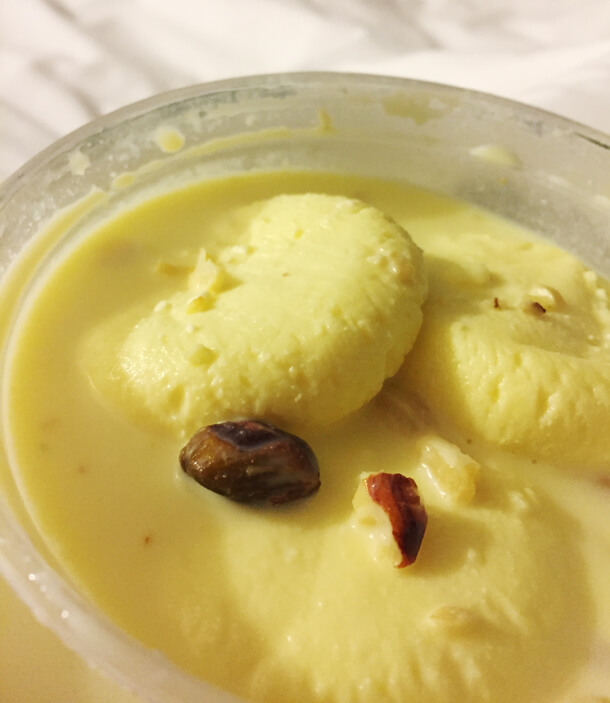 We could not leave Durban without a run through the infamous Spice Emporium on Monty Naicker road. And of course Gorima’s, a branch of which you will find quite easily in most malls and Indian suburbs. Here we bought some pukka Durban spices, chevra and mithai to bring home.

Back at the airport on our way back to Cape Town there is a Panarottis, Kauai and Steers. They all express stores which are certified halaal and there is a Muslim owned Fego Caffe which is sit down. I managed to get a decent sandwich from them to have on the flight back, as Kulula does not supply halaal meats on their inflight sandwich offering.

The beaches and surf culture are a big attraction along with a deeply rooted Zulu history. While it has become a lot more cosmopolitan in the last few years, the spicy charm of the Indian culture still weaves it’s way through the heart of Durban.

You may also like: Halaal food and facilities at South African airports