This week saw the launch of the very first Africa Halal Week held at the Westin Grand Hotel in the Cape Town CBD. An event that has been long in the making by Wesgro and has culminated in an exhibition and showcase of the some of the Western Cape’s best halaal businesses and services. From food, fashion, cosmetics, banking and technology, every sector was represented. 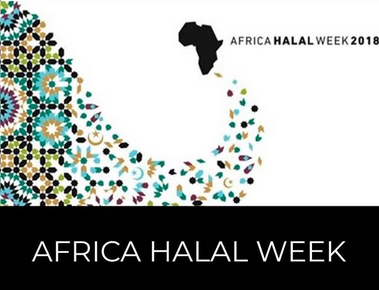 As a technology based business, I was invited to present Hungry for Halaal to the local and International delegates present as an example of how we are using technology to promote halaal in South Africa. I had to overcome some serious nerves and kill hundreds of butterflies before my talk in front of over 200 exhibitors, guests and delegates. Thankfully, it went off well and I managed to get through my presentation without fluffing it or falling off the stage in my high heels. 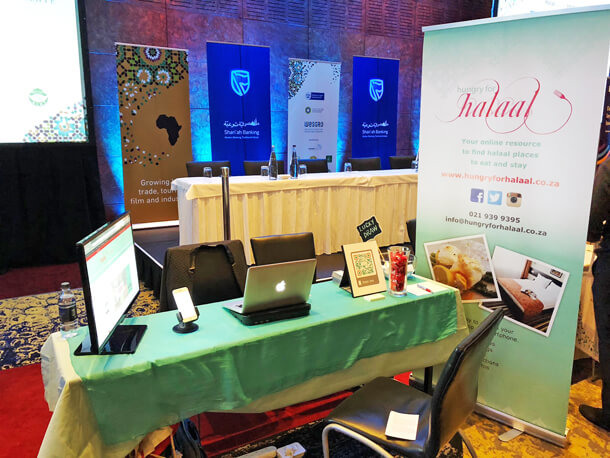 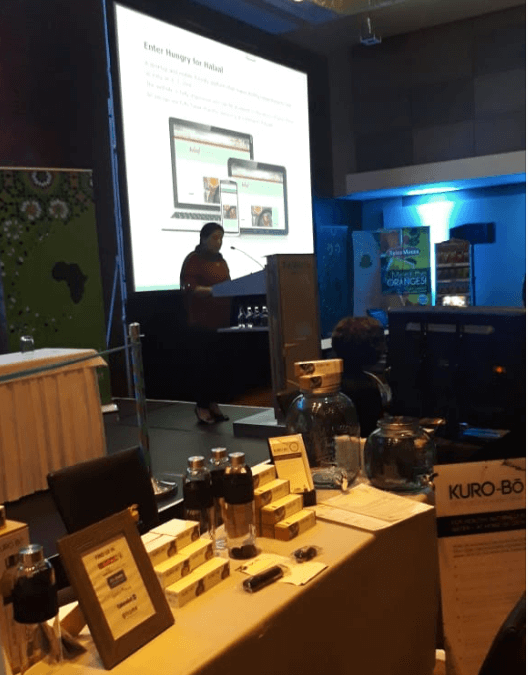 That’s me “The Shadow” lol

The objective of Africa Halal Week was to connect the Western Cape’s halaal businesses to an international delegation of buyers from the countries like Malaysia, Singapore, UAE, Nigeria and India. Various conferences on topics like how to export to certain countries, The Growth of Islamic banking and finance and understanding the Modest Fashion industry ran concurrently. Some of these ran outside the Westin Hotel in the One&Only and in the CTICC. There was so much information and so much to learn but as an exhibitor I also had to be at my stand which meant I could only benefit from a small part of the talks.

I was invited to speak on one of the Tourism panels about the halaal offering in the Western Cape along with people like Chef Lindsay Venn, Sylvana Dantu from Zari and Fayrouz Halliday from Halal Hopper, and how to package it to the outside market. This was a feisty and interactive talk. It involved both the floor and the panel and sparked lots of ideas and debate about the perception of the Muslim culture in the Cape and the often one dimensional representation of it as Cape Malay with a focus on koeksisters and bobotie and those colourful houses in the Bo Kaap. In truth the Cape is a diverse melting pot of cultures even when you drill down to the Muslim community there is an amalgamation of Malay, Indian, Middle Eastern, Somali, Turkish and more. This extends to our food as well as cultural traditions and makes selling the Cape on the basis of the Cape Malay culture a bit one sided. It was fascinating to brainstorm this in a room full of tourism professionals albeit a very short 1 hour session. 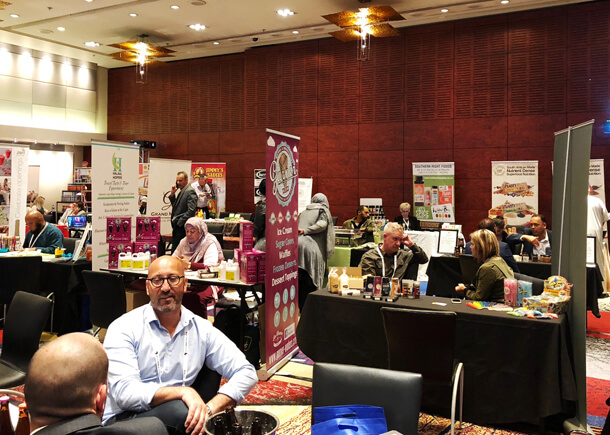 The exhibition itself was held in the Grand Ballroom and was bustling as international buyers connected with the local businesses. Deals were struck right there on the floor as with a limited time in town for the international buyers decisions had to made fast. I noticed that innovative products seemed to catch their attention. Things like Kuro Bo Activated Charcoal water filters that last up to 3 months or Munch Bowls which are quite literally edible bowls. There were several meat producers and farmers including Delville Karoo Lamb, Shera Farming and Mitchells Moslem Butchery. Delicious sweet products like Forest Fairies who make sweet confections for the hospitality industry and have brought out with a no sugar added range too, Ma Mere Confections and Aasiya’s Konfyt. Then there were well known brands like Kahvé Road, Spice Mecca and Rhodes Foods. Even banking was represented by FNB Islamic Banking and Standard Bank Shariah Banking. 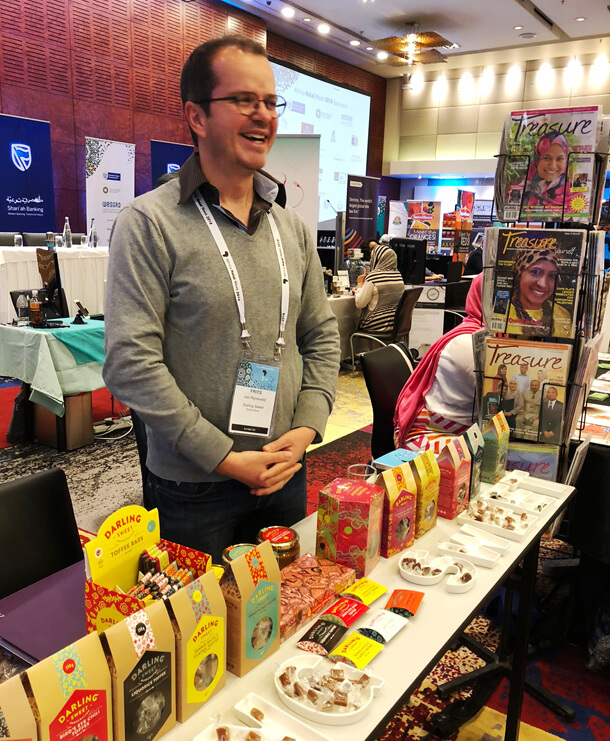 Lots of small businesses were represented like Darling Sweets 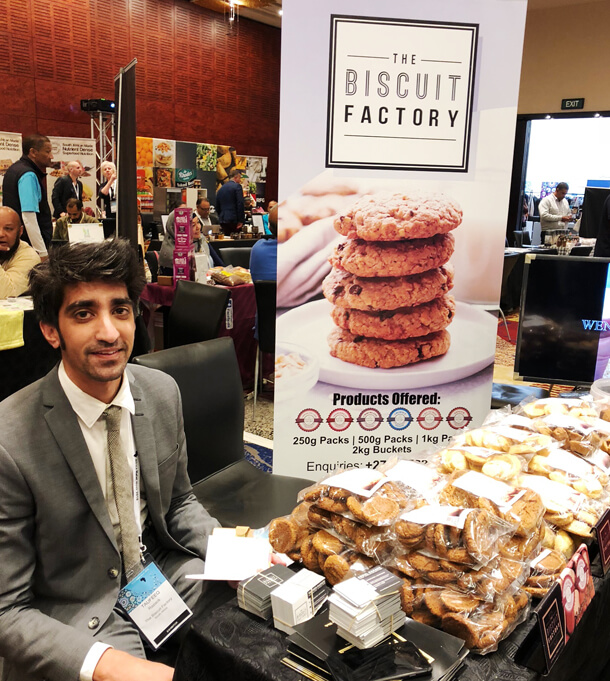 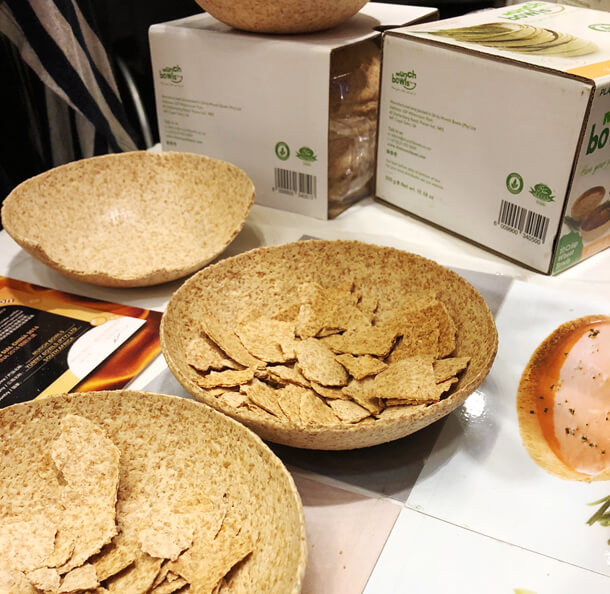 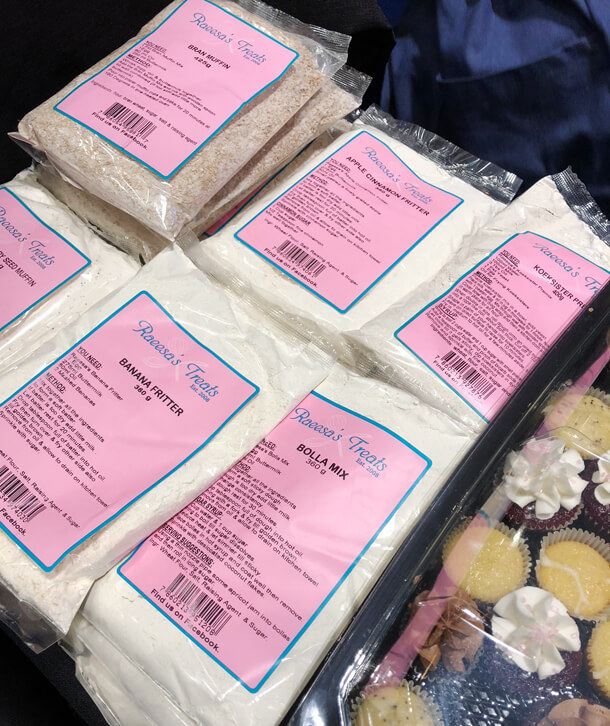 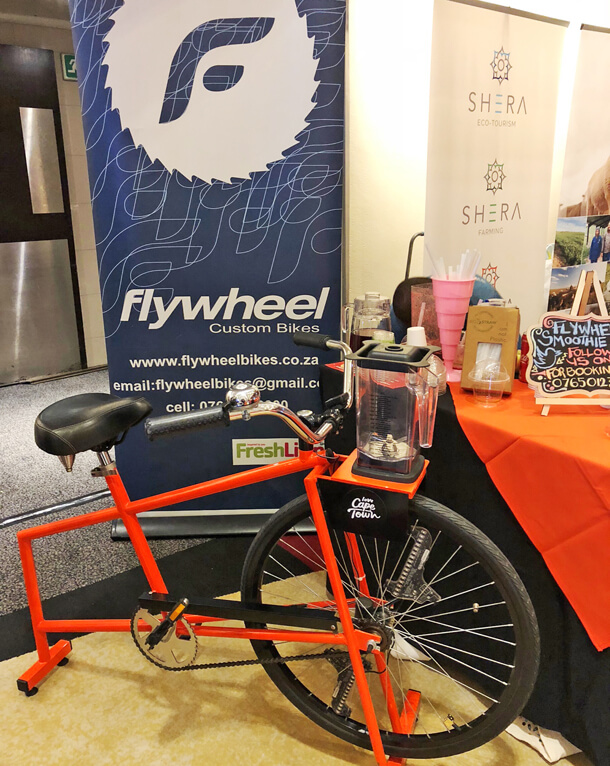 Working up a 30 second sweat for my smoothie

Modest Fashion came into focus with the foyer outside the Grand Ballroom dedicated to local designers with international quality products that included clothes, bags and cosmetics. Roshaan Isaacs, owner of Style Africa headed up the modest fashion conference with talks around the industry, it’s challenges and opportunities. 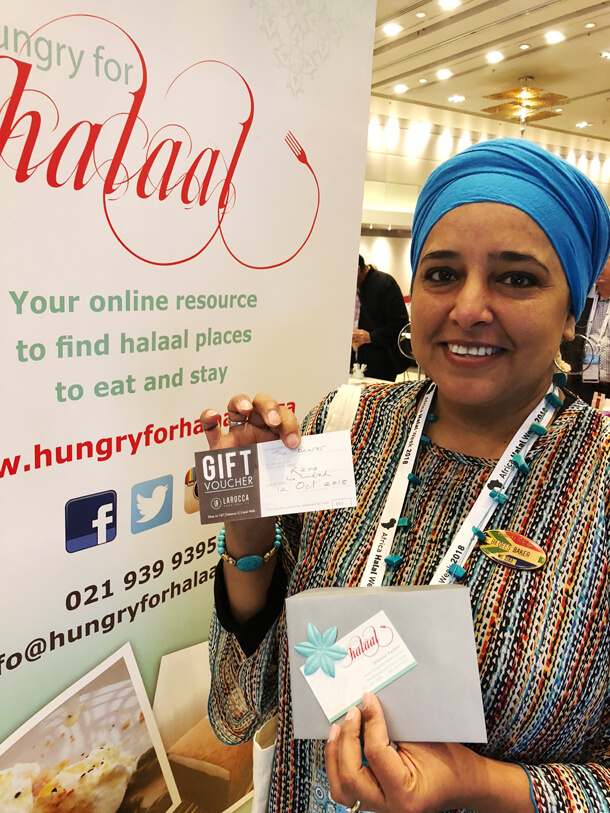 We gave away some restaurant vouchers from our amazing sponsors La rocca, Mugg & Bean Kenilworth, Panarottis Kenilworth and Brocka. Bilqees Baker was one of the lucky winners.

The plan by Wesgro is to make Africa Halal Week the centre of the halaal trade focus for Africa and an internationally recognised destination the likes of MIHAS in Malaysia. The numbers have yet to be disclosed but from the vibe over the day and a half I was there and the general feedback I think this was a big success and it can only get better from here.

*I have used the word halaal spelled in 2 ways in this post. In case you didn’t know it’s only in South Africa that we spell halaal with 2 a’s. The rest of the world spells it halal. The WC govt. want’s to standardise it to the global spelling. What’s your opinion? Please let me know in the comments.