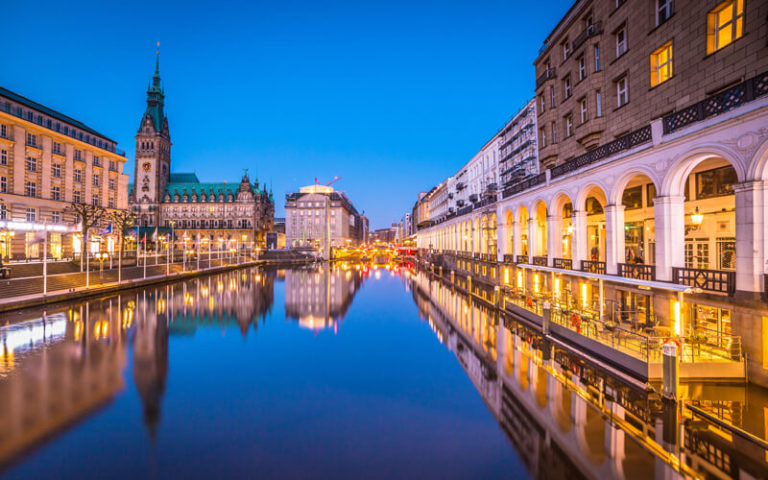 You get a serious reality check when you travel. In Cape Town and South Africa at large we are able to travel easily since the biggest problem we face as Muslims is Halaal food. Recently I travelled further to another universe called Europe and made some surprising discoveries. Perhaps my outlook was dated but I found myself questioning a lot of misconceptions. It was for me like looking at my Islam but through the lens of a kaleidoscope. The image is different, not what you expect but there is something comforting and pleasing in the overall picture.

I was on a business trip for a week in Hamburg, Germany, with a day stop in Istanbul, Turkey. I started in Cape Town on a long thirteen hour flight to Istanbul flying Turkish Airlines and arriving at four o’clock in the morning. It makes a refreshing change to be able to eat anything on a flight and that was without requesting a special diet. Airline food has come a long way and the service, even in cattle class (economy) starts with you getting a menu of options. Of course it is possible depending on where you sit that the choice has run out by the time they get to you. None the less a good meal helps put you in a good mood, necessary to manage the next ten hours of boredom and claustrophobic discomfort. After all it is cattle class. On a previous trip, two years ago, I travelled on Emirates and the food experience was much the same.

So here’s where I start questioning things. The food is Halaal but the airlines all still offer alcohol. Now I understand it’s about choice, right, and I have chosen not to partake but I have to be considerate of others needs and feelings. The airline though is supposedly Muslim, but both Emirates and Turkish Air cater with alcohol. So is the environment then halaal for me? I guess if I question this then I should drive to my destination even if it is thirteen thousand kilometres away as the crow flies. If that were the case I would be in Hamburg next year some time and would have most likely missed my meeting. Get with the times you say, well until there is a viable alternative I have to get off my soapbox. But here’s where I am confused, on the plane I can listen to the Seerah of Nabi Muhamed (S.A.W) and there’s a kiddies movie about a little boy and girl who go for their first Umrah trip, so the Airline is conscious of its origins at least. These are mixed signals I got the whole way through this trip.

Landing in Istanbul and going through duty free clearly brought home the fact that Turkey is on the edge of Europe and culture and behaviours are blurred. Again I tell myself that consideration is made for all. The first impression of the Turks is at immigration and although you can’t judge a country by the unfriendly gazes of immigration officials worldwide, I was proud to see women in hijab and in uniform. So the Muslim working women can go out in this man’s world and be a functioning and professional member of society. (disclaimer – I don’t subscribe to the belief that women should not be seen or heard but modesty is a virtue especially in this chaotic time.) Alas my stop over was brief and I was back on the flight to Hamburg. Some more airline food and the smell of alcohol and then into the very efficient almost scary land of the Aryan race.

Okay that was uncalled for, they have made amends for the disasters that were World War 1 and 2. Incidentally immigration in Germany is a biometric scanner and an automatic photograph and if you don’t look too suspicious you can walk right through on to German soil. This time I was lucky, customs didn’t feel the need to drag me off, have my bags opened and my mickey mouse jockey displayed for all to see. This has happened in the past and more but I shan’t go there.

Testing German efficiency I opted to take the train to my destination. Thanks to the internet I had checked the route, the cost and the estimated time to arrive and saved myself a fairly decent amount of Euros instead of taking a taxi. My company booked me in a hotel in Harburg in the suburbs. Having endured a red-eye flight and completely jet-lagged I decided the best way to tire my body out so I could sleep was to go for a walk in the area.

The nice thing in Europe is that you can do this late into the night and not feel you have to keep looking over your shoulder. Lo and behold I found at a masjid within walking distance of my hotel. My timing was impeccable and people were going in for Eshai Salaah. I stood side by side with German, Ethiopian, Turks, Syrian and Malaysian. After Salaah I enjoyed listening to them reciting Quran and speaking conversational Arabic and for a minute I forgot where I was. 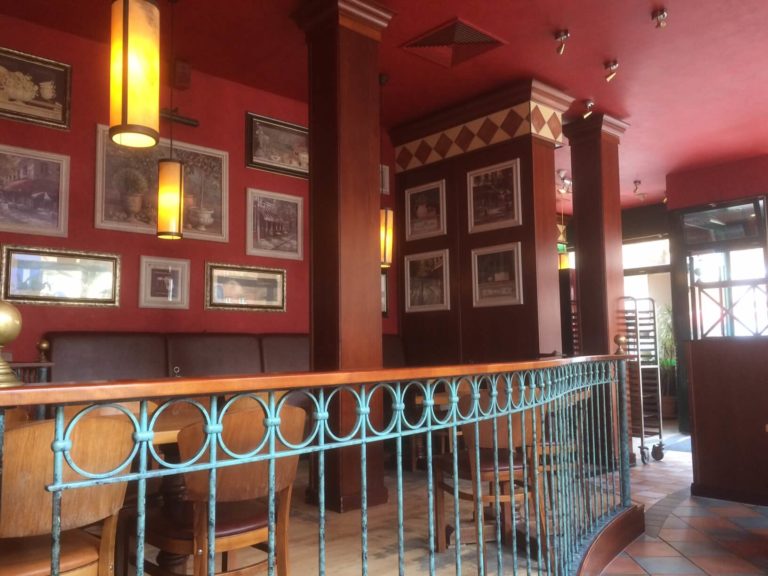 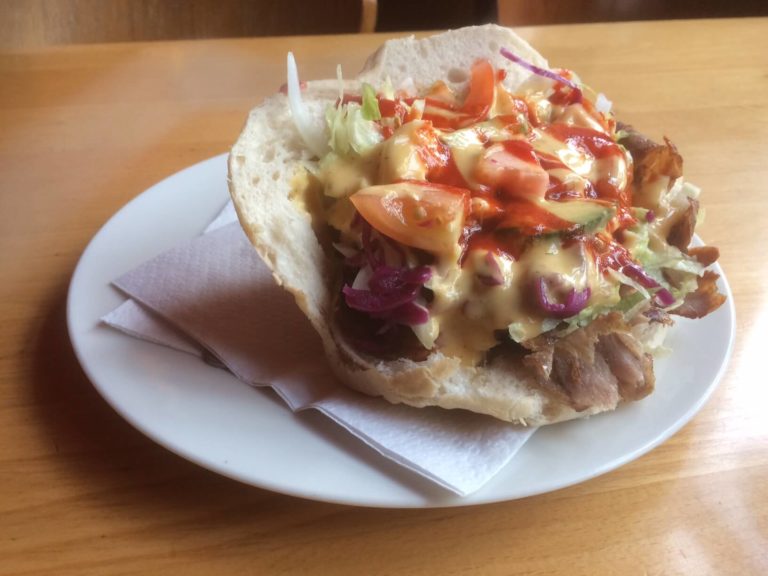 Beef Shwarma with all the salad and an avocado and chilli sauce (Euro 4.50). 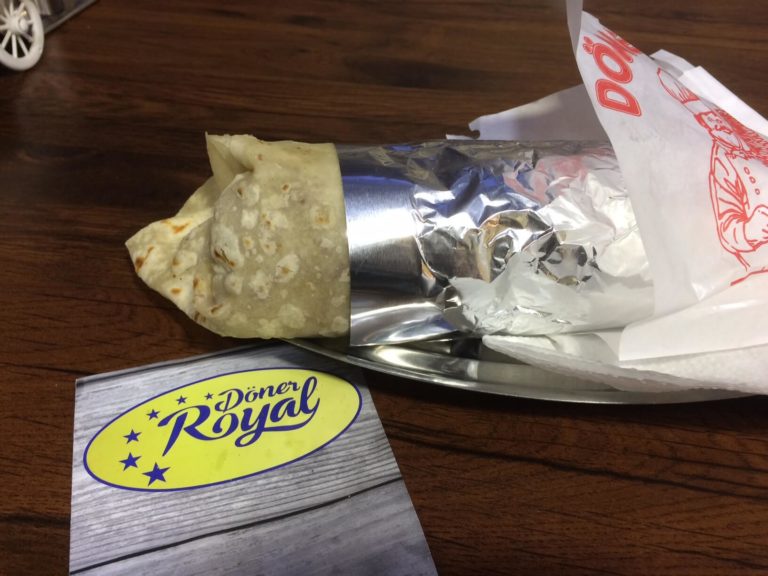 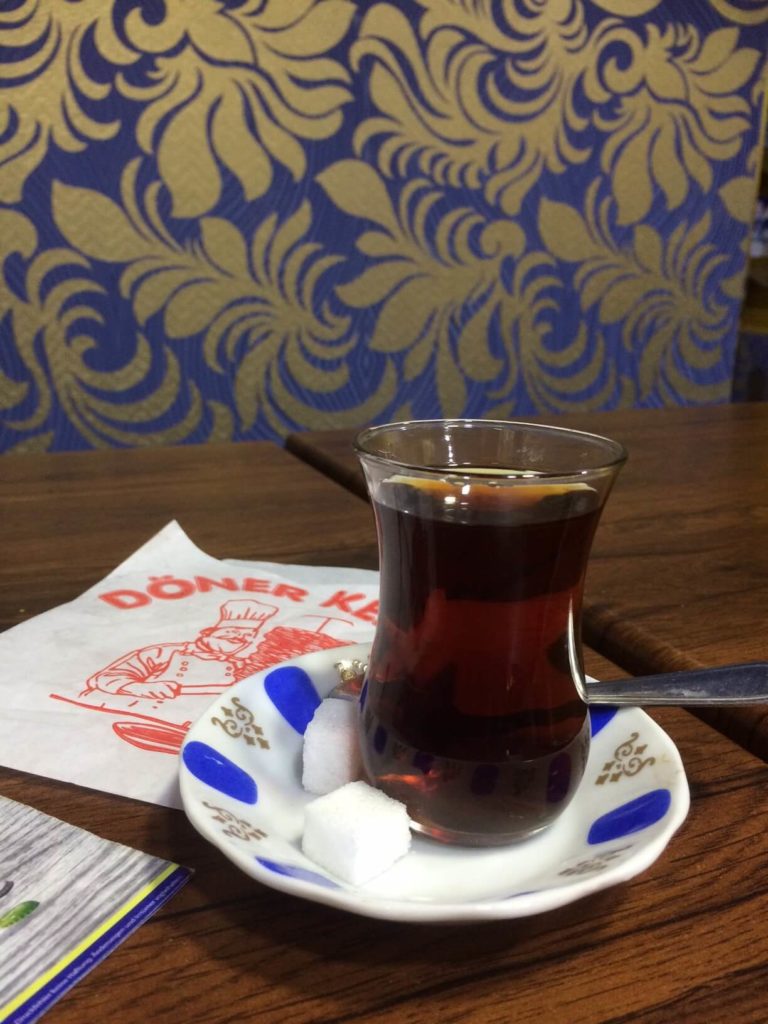 In the whole week I stayed in Harburg I found one after the other halaal place to eat. Doner Kebab, Lebanese and I even saw Halaal certificates from some governing German Muslim body. Once they know you are a foreigner like them things get relaxed and you are treated like a brother with complimentary tea after the meal. On a non halaal related note, the company treated us to a dinner one night and I got to see a novel restaurant where your food is ordered on an android tab and delivered by an overhead conveyor in closed containers that keep it all in and hot. Un-originally the place is called “The Rollercoaster”. Anyone thinking cool that’s a nice idea can inbox me and we can start talking about starting one in Cape Town. After all you are going to need an engineer and someone who works for a bearing company (me). Just saying. (T’s and C’s apply). 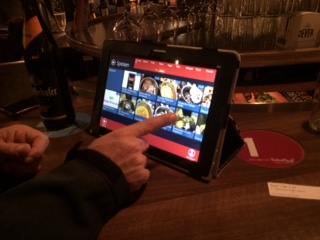 Ordering you meal on an Android Tab at Schwerelos “The Rollercoaster Restaurant”, Scholssstrabe,22, Hamburg ( approx. Euro 15.00)

The next leg of my trip took me back to Istanbul and one day of very long meetings on a Friday. Yes, the people I met were Muslim and yes, in Istanbul you can hear Azaan everywhere and no, I didn’t get Jumua. Sadly so as I was looking forward to the experience. It’s a little point of pride that I can say I have made salaah in a number of places on the globe and each has been an experience I remember fondly. 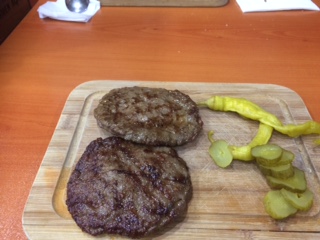 So I thought this was the end of my trip, but wait there’s more. Turkish Airlines offers a free tour from the airport back into the city which takes about three to five hours and takes you to some of the more famous landmarks. So to kill some time before my red-eye flight I went looking for this tour only to find out it runs in the day only. There are private tours which cost an arm and a leg but I had seven hours to kill after a whole day of meetings I figured I could justify the expense to save my sanity. I took the private tour and had the vehicle to myself for a five hour drive. I asked the driver for specifics wanting to go to the Sultan Ahmed mosque and the Blue Mosque. Thinking I would get Maghrib at one and Eshai at the other and if lucky, still get a chance to see the Grand Bazaar. Instead I got stuck in Friday peak time traffic and managed to only get Eisha at Sultan Ahmed. 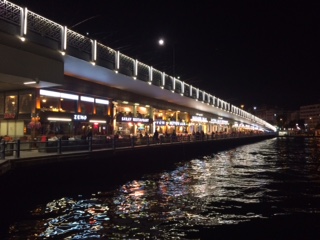 The Gellera, No 5, Ahmet Fatih, Istabul – a strip of restaurants under the walkway on the bridge over the Bosphorous River (Turk Lira 160.00) 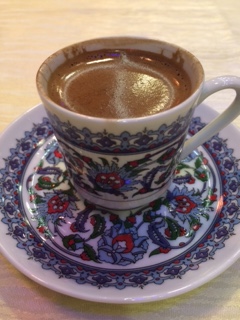 Turkish Coffee after a long day

Honestly this was the saving grace of this exhausting trip. The mosque is under renovations and in the evening is closed to tourists but you can still go in for salaah. By the way I missed both Maghrib and Eshai in jamaat due to the traffic. So the next time you are stuck in Cape Town traffic consider you might still not be spending as much time in it as others on this congested planet. I had a rather moving experience when the final dua recitation was of the calibre that speaks directly to the heart. Unashamedly brought to tears I decided I had enough and it was time to go to the airport. Security, immigration and security again and I was finally back in duty free with no money left after the tour. Only three more hours to kill and the flight is now delayed by a whole ten extra minutes. So what to do… I know, I will write a post for Hungry for Halaal. From the roving correspondent, Altaaf Khazi, eeeeNews, Istanbul… 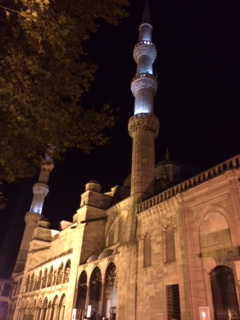 On a final serious note, this trip showed me that elsewhere as in Cape Town , Muslims have reinvented themselves in rather hostile environments, physically maybe not so much, but mentally and spiritually we are being challenged every minute of the day. And even though sometimes it looks like it, we are not failing. In some cases we have stepped up to the challenge individually and Islam stands proud for all to see. In other areas we have slipped and allowed for un-Islamic values to creep in. So long as the individual remains conscious of their own specific needs, and remain firm to the belief system we have been taught then we will grow and flourish no matter the harshness of the ground we have been planted in.

After all as Muslims, our heritage is rich with amazing examples of culture, people and architecture that still remains today with grand beauty, that still speaks to the soul.