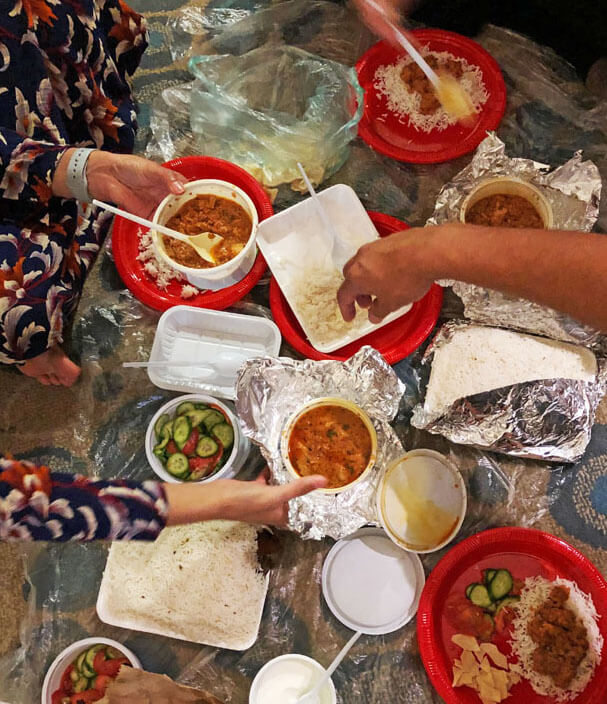 A focus on food during an Umrah or Hajj seems distasteful (excuse the pun), but we are human. And even during a spiritual journey we must nourish our bodies as we nourish our souls. From my whirlwind 2 week Umrah trip to the holy land this December the food experience is certainly one to write home about.

Our journey started with 9 days in Madinah after which we would go to Makkah for 5 days. We flew Emirates Airlines from Cape Town on which halaal food is no issue. I’d like to unpack the fact that this airline also serves alcohol but that would start a completely different type of conversation…

We arrived in Madinah to the Millenium Al Aqeeq Hotel. The hotel is one block away from Masjid al Nabawi very close to the ladies entrance, gate 16. A quick 5 minute walk from the hotel and you were on the mataaf. Our stay included breakfast which we often enjoyed straight after Fajr prayers coming back from the haram at 6.30am. I would never eat breakfast that early back home in Cape Town, but all rules and routines are cast aside on a trip like this when your ibadah dictates your every movement. Eating at that time meant you could sleep till Thuhr, which was usually the longest period of rest one could get in the day. In practice this was hardly ever possible however.

Breakfast in both Makkah and Madinah were very similar. Except for the size of the restaurant. In Madinah it was big but not in comparison to the hotel in Makkah. The Swissotel Al Maqaam in Makkah boasts the largest restaurant in the Middle East. They are able to seat 2700 people and service 4 hotels in the clocktower precinct which is connected to it. There is a lot of Mediterranean influence in the food and you’ll always find a variety of cheese, olives, humus and salad as part of the spread. The rest of the buffet is quite international with a pancake or waffles station, omeletes and eggs station, a hot buffet of sausages (mostly viennas), baked beans, potatoes, chicken livers, mushrooms ect. These would change on a daily basis. There was always a large array of breads and wraps and sweet pastries to have with coffee or tea. Popular juices that you don’t get in most other places include a lemon and mint juice (I loved this and had it every morning) and a white guava juice which is similar in taste to what we have in South Africa but is completely smooth without the grainy texture which I rather fancy. 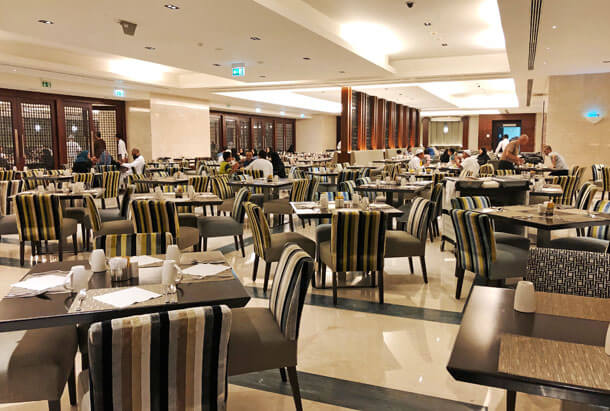 The largest restaurant in the Middle East

We found some casual shawarma and kebab shops right around the corner of our hotel. There was also the option of fried chicken and chips known as Broast. These shawarma and Broast shops are everywhere in Madinah. Sit down restaurants were not a big thing here. There were some very casual Pakistani or Indian cuisine spots. The kind of places where they covered the table in plastic before you sit so they could just whip the whole thing off when you’re done. The food was tasty, the experience functional. Fancier sit down restaurants were usually located in the hotels which surround the Masjid. These were really expensive. Think 35 Riyal (about R150) for a bowl of soup or 90 Riyal (R360) for a steak. At a 4 to 1 exchange rate, the Rand was weak and food was expensive. We kept mostly to buying shawarmas and chicken from the takeout shops which averaged at 6 to 11 Riyal for a shawarma. Chicken and chips for 4 was about 16 Riyal. (Apologies if you read this papragraph in my previous post. I needed to make it part of this dedicated food post.) 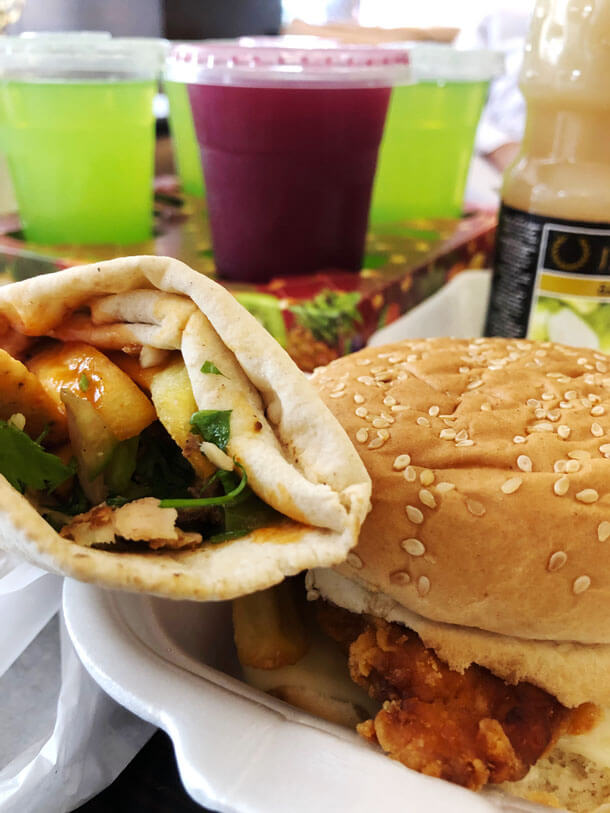 AlBaik was one of the places that several of my readers had recommended. So one day after Thuhr our group of 10 set off with our 2 moms in wheelchairs to find the Al Baik branch close to the haram. We were told that it was just past the haram and a couple of blocks walk further. So a couple of blocks turned out to be much further than anticipated and on finally arriving at the famed Al Baik we were greeted by a jammed packed outlet and a queue coming out the door. At this point I also discovered that women are not served at the main sections of these outlets. And as I wanted to see what it was about myself we had to go 3 floors up to the family section in order to be served.

Next step is queuing and defending your space in the queue. Cutting in seems to be standard practice. There is a number system but they were so full that our order took incredibly long. Then I had to push through the throng of women to get to the counter in order to get to my order. Not a fun experience. My advice, try not to go at peak meal times like after Thuhr salaah. It did live up to it’s reputation though. It’s a bit like KFC. What’s different is that they inject the spices into the chicken so you get streaks of spice and flavor inside the meat. They also have crumbed shrimps and chips which were well priced for seafood. The 4 piece chicken meal with chips and 2 sauces were 13 Riyal (about R52) and 8 piece shrimp meal 26 Riyal (about R100). I also really enjoyed the garlic sauce that came with their meals. 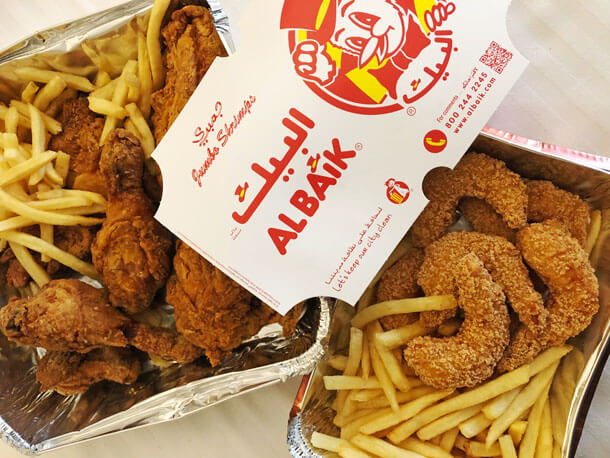 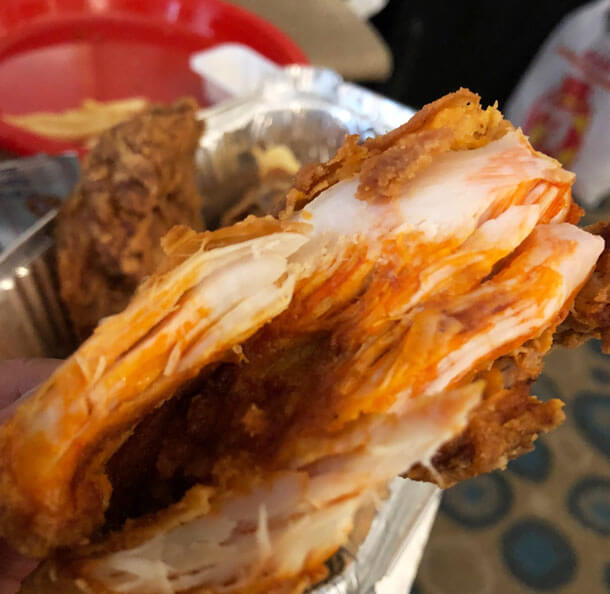 We did find some western franchises as well. There was a Dunkin Donuts, prices similar to here. Baskin Robbins, 17 Riyal or about R70 a scoop (I’ll live without Baskins thanks). KFC and Hardees where a burger meal cost about 30 Riyal or R120. My brother in law had also tried Dominoes pizza where they payed in the region of 35 Riyal a pizza but the toppings were incredibly skimpy.

Most of our meals were eaten as a group of 3 families with fast food containers spread out on the floor and everyone sitting around it picnic style. It was good to catch up with one another at these meal times. Travelling together really builds relationships. When you share experiences out of the norm you will always have something to bond over. Because most food will be takeouts a good idea is to get some cheap plastic plates that can be re-used for meal times. Bin Dawood is a supermarket chain found all over and you can find this and everything else you may need on your trip, from tawaaf socks to groceries and even homeware. The Pakistani and Indian food is good value and one serving can often suffice for 2 people. It’s flavourful and the familiar spiciness will certainly feel more like home food for most travellers from South Africa. I am told that if you venture beyond the central part of Madinah towards the suburbs then there are more good eating places to discover. Unfortunately time was against us and we never made it that far. 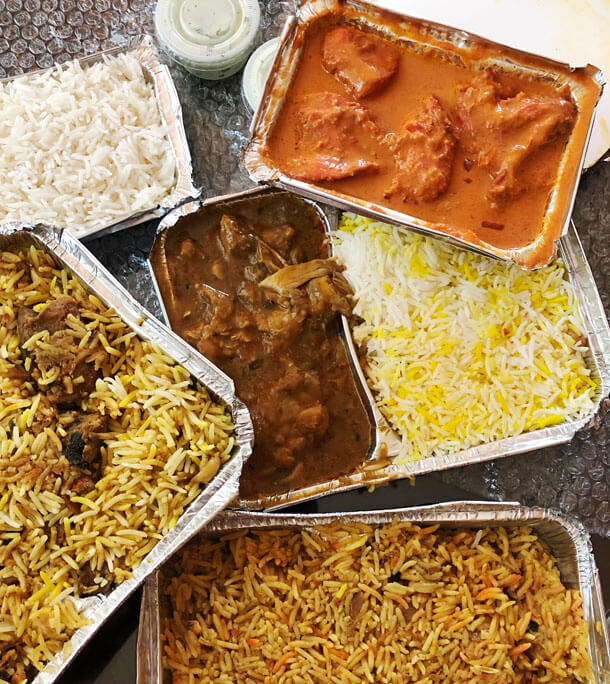 Our time in Makkah was very short and Broast chicken was the norm. There was also a Pakistani restaurant right across from our hotel, the Swissotel Al Maqaam, where you could get curries quite cheap. They are served with a thick type of flatbread which is very big. Each curry comes with 3 of these which are really filling. So don’t make the mistake of ordering extra which we did, and eventually had loads left over. Giving away leftovers wasn’t always easy. If you wanted to give it to someone it was hard to tell who was a pilgrim and who was needy. The poorest of the poor and the richest of the rich all mix in the same spaces. And while in ihraam there is no way of telling which is which. My tip: don’t order too much. It is heartbreaking to have to throw away food.

We returned to Cape Town via Jeddah where we stayed for one night. From our hotel we made our way by taxi downtown to the shopping district. Yet more kebab and shawarma shops await. Some of our group went off to find a recommended Indian place called Khaana Khazana which they thoroughly enjoyed. We found a really interesting Malaysian restaurant outside the Corniche Commercial Centre. It was more of diner setup, very simple, casual and noisy. We were ushered in by a host of sorts and in shown a single menu more like a chart with pictures of the dishes against the wall. There were options like chicken feet and other strange and wonderful things but we played it safe and had a prawn fried rice dish and a chicken noodle dish. This came with heaps of those small rice paaper chips which we used to scoop up the rice and vegetables. This was one of the best (read tastiest and most interesting) meals we had on the whole trip. Even though when Eshai’s waqt rolled around, they dimmed the lights and stopped all trade. We only realised about half an hour later when they opened the doors that they had in fact gone out (probably for namaaz) and locked the doors with all the patrons inside. 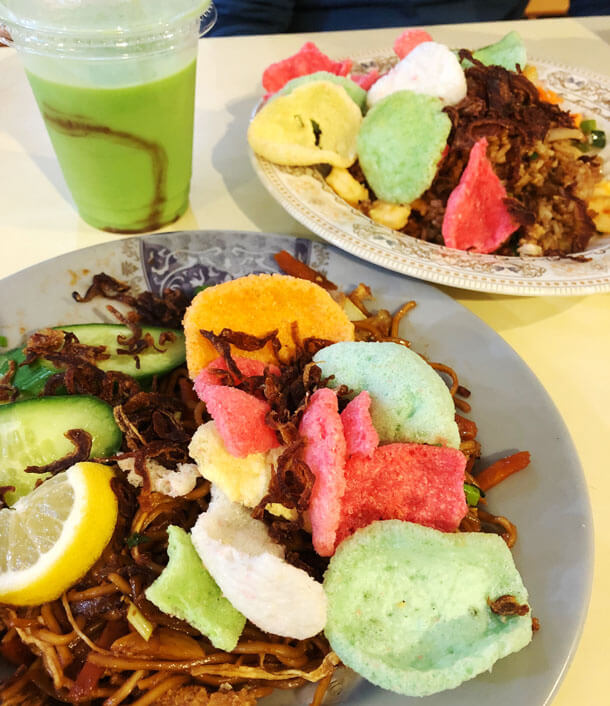 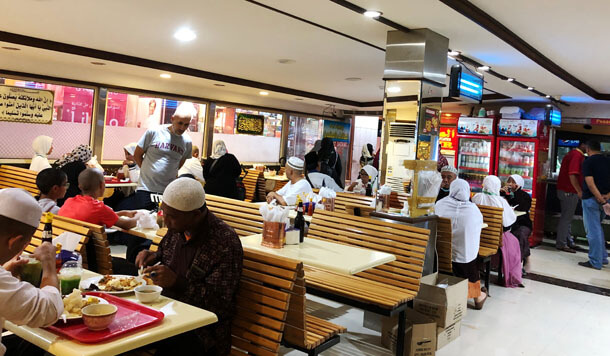 I wish I had more time to explore the food options on this trip, but 2 weeks is way too short especially when your purpose is firstly a spiritual one. Insha Allah, I hope to make the journey again soon for Hajj. Maybe a longer trip with more foodie adventures.