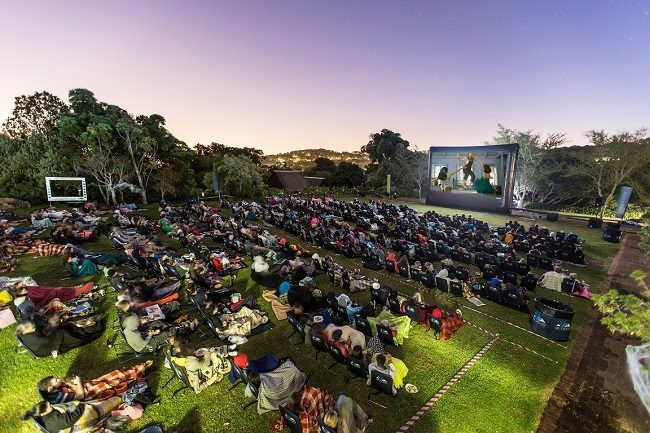 Stefani Joanne Angelina Germanotta. Quite a mouthful right? So is trying to eat a shwarma in the dark… Not the stuff first dates are made of. Luckily for my husband of ten years, he has seen worse.

We went to watch A Star Is Born at the Galileo Open Air Cinema in Kirstenbosch recently and my experience of it was a lot like sipping on a luxurious coffee but getting unground coffee nibs in your mouth every now and then.

We arrived at Kirstenbosch around 7pm, stood in the queue to be admitted and were directed to the next point of call, until we were in the garden where the main event was to be aired. Since sunset happens around 7:45pm, it was still quite light, which allowed us to collect blankets, chair backs and find somewhere to sit while soaking in the atmosphere and beauty of Kirstenbosch in the fading light. There was a stage in front of the screen with live music. We collected our ‘media packs’, which consisted of two meal vouchers, a popcorn to share and a delectable bar of Frey Swiss Chocolate (one of the sponsors of The Galileo Open Air Cinema).Not having eaten lunch, both hubby and I were quite hungry and made our way to the back where a mini-market of food stalls were conducting business.

There were 4 food stalls (The Mexican Nachos, Frikkadels, 2Kitchens and Butler’s Pizza) and one coffee stand (LION Coffee). Two of the stalls were Strictly Halaal, namely Frikkadels and 2Kitchens. Interestingly, the longest queues were at these stalls. I mentioned this observation to a lady in front of me (non-Muslim) and she commented that she finds Halaal food healthier and more filling at events. The downside is that the queue was so long that by the time we placed and received our order (we chose 2Kitchens, which served shwarmas) it was dark. Ridwaan asked the gherkins in his order to be removed but because it was dark we couldn’t tell which was which and ended up biting into both until either of us hit a gherkin and then swopped.

People who know me, knows that drama follows wherever I go and tonight was no exception. As we finally settled into our picnic chairs with blankets, correct shwarmas and a delicious deCaf latte… my phone rings! I decided to take a bag that had the most compartments possible and I was now frantically unzipping every one of them and feeling around for the siren in my handbag. In the process, I spilt the majority of my latte on myself and our blanket. Which we only discovered once felt a wet patch on a shoulder.

Stefani Germanotta (better known as Lady Gaga) gave a stellar performance in this romantic drama and it was refreshing to watch Bradley Cooper sing in front of thousands of people, but it was too long a movie to be sitting on the ground. A lot of shifting in our seats and repositioning of blanket (to avoid wet shoulder section) happened in that almost 2 and half hours.

All in all, it’s a lovely summer’s night experience. I would opt for a shorter movie though and I’d also go when it’s a bit warmer, as the air was still very cold. I had to remind myself we were sitting outside before asking to put the air con off.

Galileo has outdoor movie nights at Kirstenbosch, Century City, Battery Park, Meerendal Wine Estate, Steenberg Farm, Zip Zap Dome and more. They usually have food vendors and some are halaal. You’ll just need to enquire for each showing as the wine estates will provide their own food. You can find a list of what’s showing when and where here.

By Kausar Parker
Kausar Parker lives with her husband and two children in Cape Town.
Profession – Pharmacist
Occupation- Jack of all trades and master of none