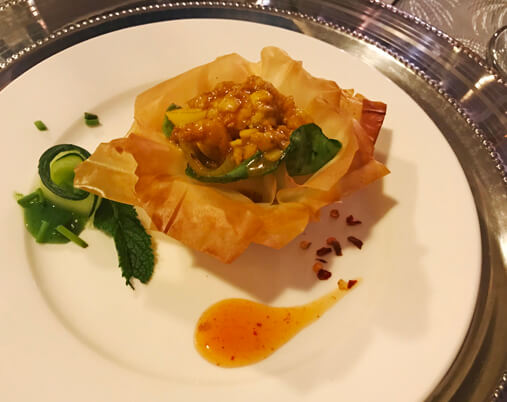 I was honoured to attend the launch of a Malay Fine Dining and Cultural Tunes experience on behalf of Hungry for Halaal. The event was hosted by Fayruza Abrahams in the warmth of her lovely Bo-Kaap home. The purpose of the dinner was to launch an experience that forms part of a cultural tour package. Fayruza Abrahams has a home-based business called ‘Taste Malay’, where she offers Cape Malay food experiences and cooking classes.

Upon arrival, guests were welcomed with a sparkling orange juice, and were given time to mingle. Her home has a quaint outdoor seating area that would be absolutely perfect for a warm summer’s night.

Guests were truly in for a treat. Once we were asked to take a seat at the table, which comfortably seated 13 people, we were served a refreshing home-made ice tea. The ice-tea had flavours of rooibos, mint and some berry elements. There were cannisters of mint water on the table throughout the night. The table décor was elegant, with blue and silver hues. The candles and dim lighting created a romantic atmosphere.

Once we were seated, Fayruza addressed us with a brief opening speech. She spoke about bringing a unique Cape Malay culinary experience to people who are interested in learning more about the culture. Furthermore, she spoke about the importance of good food to the Cape Malay community. Fayruza has a love and passion for her culture, which she wishes to bring to the world. She also outlined the menus and mentioned how Muslims begin their meal with the Arabic word “Biesmiellah’, which translates into English as, “in the name of God”. I found the Islamic education to be a good touch especially since there were a lot of non-Muslims in the group. Bo-Kaap is a majority Muslim area, and this heritage is part and parcel of the experience.

The menu was carefully curated, catering for many dietary needs such as vegetarians and pescatarians. The creativity that went into these dishes is truly remarkable. Fayruza has managed to take traditional Cape Malay cooking and put an elegant twist to it, while retaining the traditional flavours. Dishes were aesthetically pleasing and presented in ten plated servings.

For entertainment, there was traditional Cape Malay music. One of the organisers gave a brief history on the Cape Malay music. He spoke about the slave culture, and how the slaves would compose songs for the Dutch masters. Since religion was banned, these Muslim slaves were unable to practice freely. As a result, they came up with these songs, which were actually praises of God and the Prophet Muhammad, peace be upon him. Since the Dutch could not understand Arabic, they were merely entertained, unaware of the true meaning of this type of music. In addition, Cape Malay music encompasses “qasidas” too, which can be defined as “poetry” in English. The music can take a heavy and light note, but is ultimately aimed to soothe the soul. During this time, the athaan sounded, and the significance of the call to prayer was explained. These bits of information are a wonderful way to spread positivity about Islam.

On to the food. We began with four different starters. First, we were served a delicious take on the traditional pickled fish recipe. Boneless pickled fish was served in phyllo pastry baskets. Next, we had three courses plated in one. On this plate were four mini chilli, cheese and corn samosas, a trio of vegetable chili bites and a creamy peri-peri chicken horn. The cocktail samosas were the perfect size with good flavour. The vegetable chili bites were different and I quite liked this alternative to the traditional ‘daaltjie’. Fayruza used vegetables like cauliflower, marrow and brinjal. This added another dimension to a familiar dish. The peri-peri chicken was rich, creamy and tasty. In addition, there was a salsa type of salad, with banana, onion and tomato. It was my first time having a savoury salad with banana, but the flavours worked well together.

If I thought that the starters were impressive, then I had no idea what was in store with the main courses. To begin, we had a medley of seafood curry baskets. The plate housed an oyster, which had a lemon butter flavour, a coriander naan-like mini bread and a seafood curry. The seafood curry was aromatic, with the right amount of spice. It contained bits of calamari, shrimps, a prawn and smoked mussels. Thereafter, we were served a traditional denningvleis with creamy potato mash and a miniature bunch of carrots. The meat was cooked to perfection. It was tender and tasty. The nutmeg on the mash potato and carrots added a good craft of flavour, keeping to the Cape Malay way of preparing this dish. Next, we were served bobotie with sweet yellow rice and sambal. This dish was the best, in my opinion. The bobotie was packaged in two mini phyllo pastry wrappers. When I bit into these, a taste of heaven was released. It had all the traditional flavours and more. The meat was cooked well and oh so tender. The pairing with the yellow rice, and a bit of sweet butternut was the ultimate culinary experience. The sambal was the same as previously described, with banana. To end this portion, we were served chicken biryani balls with a yoghurt and mint sauce. This was a super creative way to present a traditional dish like biryani. It did not disappoint on flavour. All the elements were present – rice, chicken, lentils and spice. The yogurt and mint sauce complimented the dish well. Each dish presented an element of crunch, along with this journey of flavours.

The dessert was a magical experience. The first three courses of the section were served on one plate. The milk tart cup was a unique take on this traditional dessert. The pastry was choux, filled with milk tart, and topped with cream and a blueberry. After one bite, I could instantly recognise that distinctive milk tart flavour. Next up, I tried the chocolate mousse, with a hint of chili. It was spot on. The chocolate mousse was a rich dark chocolate, harbouring complementary cocoa and chili notes. Then I sampled the bollas immersed in a saffron syrup. I liked that this dessert kept to its traditional look and taste. I could get mild hints of saffron, and I did not miss the coconut at all. The gold leaf added an elegant touch. The addition of berries was somewhat of a welcomed pallet cleanser. Lastly, we were given the highlight of all dishes – the falooda-ice cream. I fell in love with this concept. It was rich and creamy. All the traditional falooda flavours were present, from the rose syrup to the sweetness. It was a hit. Every guest was is awe of this show stopper. The berry coulis added a sour balance to the sweetness.

In keeping with Cape Malay tradition, when you depart to return home your host will present you will a ‘barakatchie’. This is a little gift of food, wherein the blessings are shared. We received a beautifully packaged smaller version of this tradition.

To experience Cape Malay hospitality at its finest, get in touch with Fayruza:
Website: www.tastemalay.co.za
Cell: +27844713370
Email: fayruza@tastemalay.co.za

By Maryam Bibi
Maryam is a molecular scientist by profession with a passion for writing. She currently works as a freelance consultant offering laboratory advisory, scientific editing, and English language services. She loves and is always looking for the next adventure. Connect with her at http://www.mbrumaney.co/